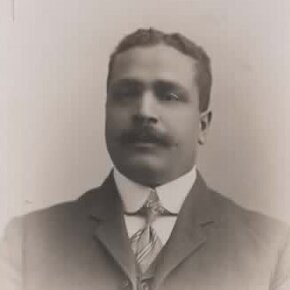 Came to Saskatchewan in 1896 from Ontario.  Passed away 9 March 1915 in Winnipeg, Manitoba and is buried in Melfort, Saskatchewan.

Alfred Schmitz Shadd, the fourth son born to Garrison and Harriet Pointdexter Shadd, lived life to its fullest. He is remembered for his diverse interests and unbridled energy.

Despite growing up in relative poverty, Shadd dreamed of becoming a doctor and graduated from Trinity College at the University of Toronto in 1898. To cover the cost of his studies he taught school for a short time which is what brought him to Saskatchewan in 1896. The prairies and the people must have made an impression on him because he returned to the Kinistino area once his studies were completed. Dedicated to his craft and to life-long learning, Shadd pursued graduate studies in Europe at the age of 37.

His compassion for his patients is legendary. An editorial in the Melfort Moon newspaper, March 17, 1915 states, “No drive was too long; no night too dark; no trail too rough to deter the doctor when the call for assistance came . . . Rich or poor, he made no distinction and nobly he performed his duty.” A long-time resident of the area remembers, “I will never forget Dr. Shadd sitting beside my little sister keeping her swatched in cool cloths and wrapped in cotton batting and oiled silk when the measles went back in on her. She had to learn to walk all over again but he saved her. Rain or snow, road or no road didn’t stop the doctor. If there was no trail for the buggy or cutter he would take to horseback.”

Shadd’s diverse interests included farming and politics. He succeeded in growing the first crab-apple trees in the area and was also known for his successful mixed farming operation. His pride and joy was a bull called Bandsman’s Choice, a prize winner at the Toronto Exhibition.

His political career was less notable, losing his bid for the Northwest Territories Assembly in 1901 and then the Legislative Assembly in 1905. Nevertheless he continued to involve himself in politics and proved to be a powerful and influential public speaker. With characteristic passion he didn’t allow friendship to interfere with forcefully presenting his views on any given topic. He believed in decentralized government and strong provincial control over policies that directly impacted the residents of the province. A local newspaper reported “he was a fluent and forceful speaker and could rouse his audience to the wildest pitch of enthusiasm when on a political campaign.” He also found other ways to promote his political ideas as owner/operator of the Carrot River Journal from 1908 – 1912.

His community spirit and boundless energy kept him involved in community affairs. He served on Town Council, was a member of the School Board and served as Church Warden for All Saints Anglican Church. He was the first President of the Melfort Agricultural Society, was an active member of the Masonic Order and supported the Red Cross Society after World War I began, as an inspirational speaker.

In all his endeavours Shadd urged his neighbours to think ahead to the future. Unfortunately his own future was cut short and Doc Shadd passed away at the age of 45 of appendicitis. However, while he lived, he did so in the fast lane. He owned one of the first automobiles in the area, a red Reo and he loved to drive at top speed. When the doctor was on the road everyone else got out of the way.

In 2015 SACHM published the book "Li'l Shadd" written by Alix Lwanga and Miriam Korner who was the illustrator.  The book is believed to be the first book located in elementary schools in Saskatchewan that recognizes the contribution of the first known person of African descent to be documented in Saskatchewan.   In 2020 it was translated and published in French by Your Nickel’s Worth Publishing (YNWP) with assistance from Creative Saskatchewan.