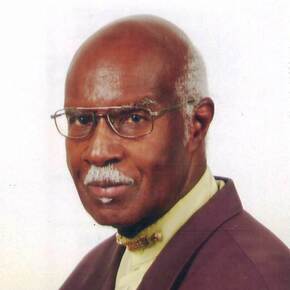 In 1993, Bert and his family moved to Regina, He joined the Saskatchewan Caribbean Canadian Association (SCCA) in 1994 before being elected as its President in 1996. He is one of the co-founders of the Saskatchewan African Canadian Heritage Museum Inc.

Bertram (aka Bert or Bertie) Clarke was born in 1941 in Barbados where he received his early education and was a teacher at the Lodge School, his alma mater and the Princess Margaret Secondary School. He was also an auditor at the accounting firm Fitzpatrick Graham & Co. He was actively involved in the leadership and administration of his elementary school Old Scholars’ Association – St. Mark’s and in the foundation and management of the St. Mark’s Cooperative Credit Union.

He emigrated to Canada in 1969 and resided in Toronto. On arriving there, after hearing those disheartening words “can’t hire, no Canadian experience” on quite a few occasions, he secured permanent employment at Crown Life Insurance Company. He immediately sponsored his fiancée Yvonne Maureen Francis and they were married later that year. Bert and Yvonne have two children and three grandchildren.

While the children were growing up in Toronto or more specifically Vaughan, Ontario, where he moved to in 1981, Bert, who has always been an active community participant, realized that the soccer program in his community was deficient. Together with other similar-minded parents they founded the Glen Shields Soccer Club in 1982. He participated in its development while holding various executive positions, including President, as well as coaching and managing club teams, receiving the 1990 Under 15 Manager of the Year Award from the National Soccer League. The Glen Shields Soccer Club has won many tournaments and championships throughout Canada and the USA. He was Treasurer for the Region of York Youth Soccer League in 1986 and 1987. He received the York Region Soccer Association Meritorious Award in 1992 for his outstanding contribution to soccer in the Region. He was recognized by the City of Vaughan in 1993 for his commitment in promoting soccer there and was inducted in the Glen Shields Soccer Club Hall of Fame in 2002. While living in Vaughan, he also served on the Committee on Race and Ethnocultural Relations and was an active member of the St. Hilda Anglican Church, Toronto where he served as a Sidesman.

In 1993, Bert and his family moved to Regina when his employer, Crown Life Insurance Company, relocated. It did not take him long to be active in the African-Canadian Community. He joined the Saskatchewan Caribbean Canadian Association (SCCA) in 1994 serving as its Bulletin Editor for two years before being elected as its President in 1996, a position he held until 2000.  In 2003, he vacated the role of sitting Past President after being elected as Vice-President of Finance (aka Treasurer), a position he held until 2009. In addition to elected offices, Bert served on occasions as Mosaic Manager, Co-ordinator of certain Mosaic Divisions and Chair of various fundraising and organizational committees.

Under his leadership, the Saskatchewan Caribbean Canadian Association (SCCA) continued its tradition of cultural interaction with the other residents of Saskatchewan through many successful Black History Month and Caribbean Countries Independence Anniversary Events. It also maintained its fundraising activities supporting local hospitals and humanitarian organizations and providing assistance for Caribbean countries after natural disasters. His efforts to secure a building for the SCCA to serve as a gathering centre for the community fell short, but they have left the Association with a solid foundation on which his successors can proceed to fulfill that dream. He was very supportive of programs for the youth, but never allowed them to forget that the opportunities they have and which some take for granted are owed to the Association elders and members.

Bert considers inviting and convincing The Honourable Jean Augustine, an immigrant from the Caribbean island Grenada, the first Black Canadian Woman to be elected to the Parliament of Canada and to serve as a federal minister, then Secretary of State for Multiculturalism and the Status of Women and the person mainly responsible for the Federal Government formally proclaiming February as Black History Month across Canada, to come to Regina in 2003 to be the Guest Speaker at the SCCA Black History Month Banquet as one of his most memorable accomplishments. This was followed up in 2005 with the invitation of and acceptance by The Honourable Donald H Oliver, Q.C. a Black Nova Scotian member of the Senate of Canada, the first black man to be appointed there, a ubiquitous spokesperson for Diversity, Pluralism, Fairness and Equality to be Guest Speaker at that year’s Black History Month banquet.

Bert’s volunteerism and participation in the community extended beyond the Saskatchewan Caribbean-Canadian Association. He is a founding member of the now defunct Black History Month Committee of Regina. He is a member of the Regina Domino Club and Club 55+ Bowling League. He was also an active member of the St. Matthew Anglican Church, now merged into Immanuel Anglican Church, serving as a Warden and Vestry Member for many years. He is one of the co-founders of the Saskatchewan African Canadian Heritage Museum Inc. Bert retired in 2001 as a Senior Business Analyst, a Fellow of the Life Management Institute (FLMI), a Customer Service Associate (ACS) and an Associate of the Insurance Agency Administration (AIAA) from The Canada Life Assurance Company, the buyer of Crown Life Insurance Company, after 32 years of service.