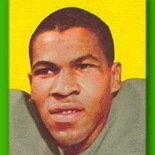 Ed began his Canadian Football career with the Calgary Stampeders in 1961. He played sparingly for them in the first year but blossomed in 1962 with 824 yards rushing and 6.0 rushing average.

Injuries curtailed Ed in 1965 and 1966 season to only 4 and 6 games, respectively. Ed was a member of the 1966 Saskatchewan Roughrider Grey Cup team Champions.  He came back strong in 1967 with 695 yards rushing (5.8 yards per carry) Ed did not play in 1968 and was traded to the Hamilton Tiger Cats, where he played for two years before retiring.