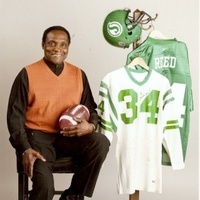 George Reed became famous as a football player and built upon that to become a success off the field and a celebrated leader of numerous charitable causes.  His football career began in junior high school in Renton, Washington and college at Washington State University.

Widely recognized as the greatest running back in the history of the Canadian Football League, his 13-season (1963-75) career with the Saskatchewan Roughriders was highlighted by being named the league’s outstanding player in 1965, leading the team to its first Grey Cup triumph in 1966, five rushing titles, 11 1,000-yard seasons, nine Canadian all-star team selections (10 Western).   He held the CFL record for career rushing yardage for 33 years and his total of 134 rushing touchdowns remains unequalled.

Reed further distinguished himself  in the business community as a sales representative for Molson Brewery for two decades and as the long time president of the CFL Players Association, which under his direction made enormous strides in achieving essential rights and fair working conditions for all its members.

While lauded for these efforts, Reed’s stature in Saskatchewan is most noteworthy as a spokesman and champion for charitable causes, particularly for those who are mentally and physically disabled and specifically for the assistance provided by the George Reed Foundation for the Handicapped.

His diverse contributions to the community were recognized in 1978 when he was made a Member of the Order of Canada. Born in Mississippi and raised in the state of Washington, he has worked throughout his life to contribute to his community, lending his time and efforts wherever he can to help the broadest range of society.

Molson Hole in One Program

Saskatchewan Sports Hall of Fame Board

Board of Directors Buffalo Days Committee

George and Angie returned to Regina 1n 2009 from being in Calgary 25 years.  George retired as Director of Guest and Community Relations for the Saskatchewan Gaming Corporation. His autobiography, written with John Chaput *George Reed: His Life and Times*, was published in 2011.