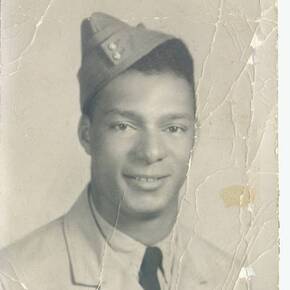 Lived in Saskatchewan all his life. Son of homesteaders Lewis and Lillie LaFayette.

Glenn Edward LaFayette was the sixth child born to Lewis and Lillie LaFayette. The LaFayette’s started farming with ¾ section in 1909. As the family grew so too did the farm eventually including over 8 sections and ½ section of pasture. They never sold land out of the family. The land was very stony and this required extra work to clear it. At the age of seven Glenn started picking stones and helping with farm chores.

Glenn did not remember any contact with other Black families when he was growing up. He does recall however, a trip to Maidstone to visit his Aunt Ina, a school teacher there. Going on a trip was pretty exciting in those days.

Glenn remembered lots of good times at school. He finished grade 9 but then decided he wanted to work. He worked with his father and often with his brother William Earl. They liked to play tricks on each other and joke around. Glenn continued to farm with the brief interruption of the war years.

Although he thought war foolish and didn’t particularly want to fight he made a contribution to the war effort using the skills and talents he had. Glenn enlisted in the Canadian Army where he served as a cook, a craft he learned from his mother Lillie. As a cook he served between 400 to 1300 men in camp. He was stationed in Belgium, Holland, France, England and Scotland.

Glenn also joined the Farmer’s Union in 1953 when he started farming his own land. He believed in people helping one another to achieve greater things.

Glenn never married and had no children. He claims not to have married because he liked peace and quiet!

Glenn passed away June 1985 and is buried in a Soldiers’ plot in Herschel.