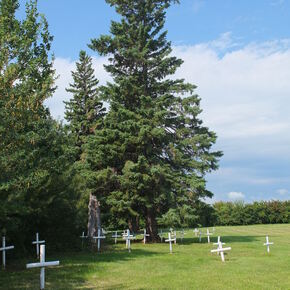 Joseph Mayes was a community leader. Not only was he the community’s Pastor he also led a group of families to the Canadian prairies. Here, at the age of 54 Joseph Mayes and his wife Mattie established a farming operation and with others in the community built the Shiloh Church. Joseph is described as an honest, hard-working man. He believed that people “reap what they sow.”

Together Joseph and Mattie raised a family of 10 boys and 3 girls. They used oxen and horse to break up the first 30 acres of land on their homestead. Joseph hewed the logs and built his family a home plastered with lime made from his own lime kiln.

His children were taught “honour your father and your mother and to do what was right. Since we only have a short time here on earth, we shouldn’t get mad at each other but should be happy." It wasn’t right to swear, hit or smoke. Each Sunday, Joseph also taught the community congregation, preaching at Shiloh Church as their Pastor.