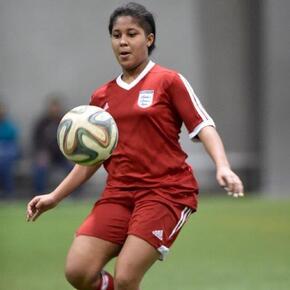 Born in 2000 in Regina, Saskatchewan

Keniyah played soccer from age 10-17, starting playing with City of Regina (FC) league and than went on to play for Queen City.  She played though out elementary and high school.  While playing soccer, she enjoyed her time and experience as she learned that she was very good at soccer!  She was very fast giving her an advantage against her components!  She went on playing in tournaments all over Saskatchewan!  She played her final game in her grade 11 year as she injured herself (tore her ACL).

Keniyah continues to live in Regina with family.  She is granddaughter of long time SACHM board member Winnifred Rogers and husband Barry Rogers.