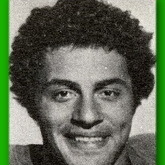 Lou was born in 1950 in Toronto, Ontario

Lou attended Gordon Graydon High School.  His football team won the Toronto football championships in 1968.  He was a member of the All-Star game for Toronto and voted Most Valuable Player.  Lou was the Outstanding Sport Person for Gordon Graydon High School in 1968.  He attended the University of Minnesota on a 4 year football scholarship where he played fullback and strong safety.  He held the record for the longest field goal for 3 years.   Lou played with the Hamilton Tiger-Cats (linebacker) and Montreal Alouettes (defensive back) after leaving the Saskatchewan Roughriders (Defensive back) in 1980.  He played in 2 Grey Cup games.  After a total of 9 years in the CFL, Lou retired in Regina, Saskatchewan.  Lou passed away in Regina, August 21, 2017.

1987 - Inducted in the Mississauga Sports Hall of Fame