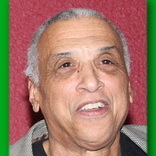 Phil attended high school in Providence Rhode Island, and college at Arizona State and Idaho State, where he played Wide Receiver and ran track with Wilma Rudolf and Jimmy Hines.

Phil enjoyed an 8-year career in professional football playing for the NFL and CFL with the Oakland Raiders, Montreal Alouettes, Edmonton Eskimos and finally as a Defensive Back for the Saskatchewan Roughriders in 1977 - 1978 before his retirement.

His career accomplishments include:

After football, Phil returned to his home state of Rhode Island, and then decided to move his family back to Canada and make Regina their home.

In semi-retirement he sparked his love of painting both residential and commercial and owns and operates Philly’s Painting in Regina.

Phil has 4 daughters, 4 grandchildren and one step-son. Phil and his wife Joan are happily enjoying their semi-retirement in Saskatchewan.

Phil has been a SACHM board member since 2011.