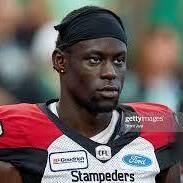 Sindani played his high-school football at Campbell Collegiate in Regina

Sindani played his high-school football at Campbell Collegiate in Regina, earning league all-star honours in his senior season. He played for Saskatchewan at the 2012 Football Canada Cup.

Sindani played CIS Football for the Regina Rams from 2013 to 2015 where he played in 20 regular season games. With the Rams, he recorded 33 receptions for 467 yards and three touchdowns.

In 2016, Sindani played for the Calgary Colts of the Canadian Junior Football League. He played in eight games and caught 31 passes for 414 yards and two touchdowns.

Sindani transferred back to university football to play for the Calgary Dinos Football in 2017. With the Dinos, he played in six regular season games and had 23 receptions for 280 yards and one touchdown. He also played in the Dinos' Hardy Cup victory over the UBC Thunderbirds Football that year.